I typically give Jared a hard time about the weather especially during long bouts of never-ending rainy or overcast days. This weekend, I decided to give him a break mainly because we were celebrating our anniversary, but mostly because everywhere we went he got a hard time from someone else. To give you an idea… Nashville experienced record-breaking heat Friday through Sunday with the temperatures hitting the mid-90’s. It’s the first full week of October and most everyone is ready for it to feel like fall.

Jared loves when people come up to him to either give him a hard time or to thank him for the weather above. I swear he likes the idea of people thinking he has some sort of decision-making when it comes to forecasting. So for 3 years of marriage we had 3 days of 90-degree heat, but I swear it’s all on Jared and I have nothing to do with it.

We both took Friday off from work and spent the entire weekend here in Nashville. I had been asking Jared to join me at Barry’s Bootcamp for over a year and he finally came through and signed up for a class with me. We started our weekend celebration with an invigorating workout. I loved it (as usual) and Jared survived.

The Gulch was already humming with tourists when our class finished so we decided to grab a smoothie at the Juice Bar and stroll around the area while watching people love on our city. 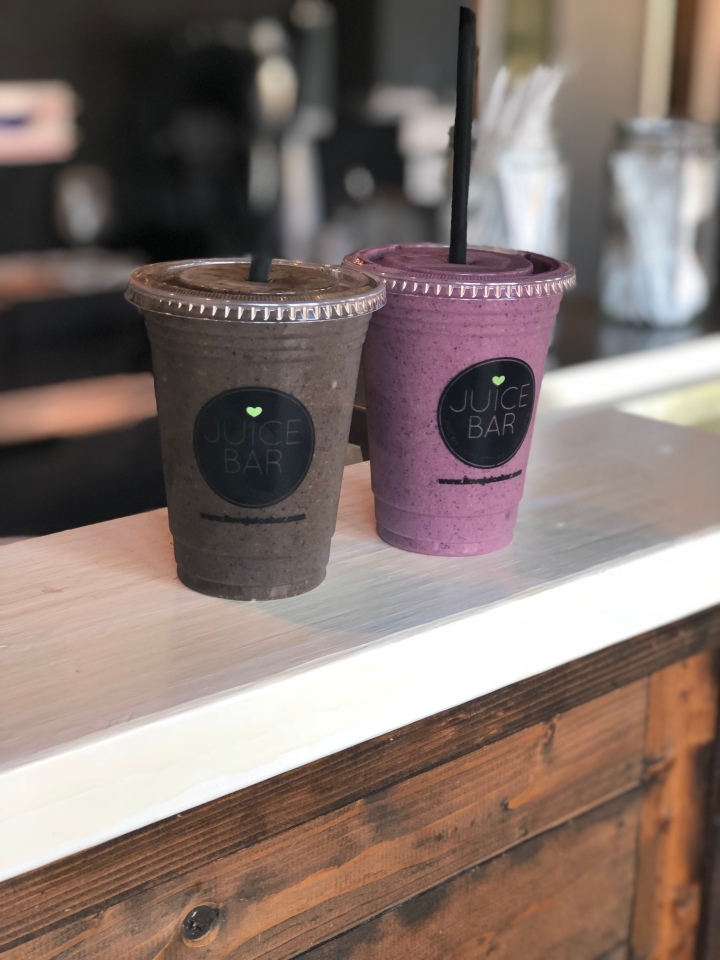 For lunch we went over to True Foods to have a light bite. We didn’t want to eat anything too heavy because Jared had made special dinner reservations for us that evening at Bourbon Steak, located at the top of the new JW Marriott in downtown Nashville. We both had been wanting to try the much anticipated Michael Mina steakhouse since we heard of the plans for its opening.

At True Foods, we sat on the outdoor patio under an umbrella that shielded us from the abnormally hot October sun. I ordered the Korean Noodle Salad, Jared got the Mediterranean Chicken Pita and we shared the cold brew coffee topped with shaved coconut. It was delicious and the patio seating made for a fun experience watching people trying to snag a parking spot across the street at Trader Joe’s — that place is popular on the weekends!

As I mentioned in my initial post, we love to eat and explore new restaurants, however we rarely eat out twice in one day. We try to save money and maintain a healthy lifestyle by cooking at home as often as possible. However, this weekend was truly the exception to the rule and we enjoyed every bit and bite of it!

Now to Jared’s favorite part: Bourbon Steak. He had made these reservations about a month ago and could hardly wait to tell me about his plans to bring me there for our Anniversary. Something you may not know about Jared is when he get’s excited about something he can barely keep it to himself. So I had known about these reservations for a good three weeks and was equally excited. When we arrived at the JW, we were shown to the “express” elevator that took guests from the lobby directly up to the restaurant’s 34th floor. As soon as you walk off the elevator and to the hostess stand you get a peek of the expansive views of downtown Nashville that you are about to experience in the dining area.  It was so much fun to see the city lit up in all different areas of downtown. Jared and I agreed that the vibe felt very mid-town Manhattan with a noticeable nod to Music City. The food was equally phenomenal and many of their dishes came with a table-side show of their own — check out the Lobster Pot Pie video.

We finished up our weekend with a lot of needed rest and relaxation — as well as some good news… Jared has informed me that there is going to be a cool down towards the end of the week. YAY!

Happy Mother’s Day to my beautiful momma! I am blessed beyond measure to have you as a mom! @robson3767 @sarah.j.robson
Happy Birthday to the love of my life, @plushnickwx ❤️ You amaze me each and every day. Cheers to another year, love!
Happy Birthday to my beautiful baby sister @sarah.j.robson. I love you more than anything in the whole world ❤️ Cheers to another year filled with love, adventure and happiness 😍 xox
Testing out @sarah.j.robson new weighted blanket. It’s literally all she has been wanting for her birthday this year. Happy Birthday to my baby sister!! Xoxo 😘 #nashville #cheetahprint #weightedblanket #cozyvibes #sisters #birthdaygirl
SNOW in Nashville! ❄️❄️❄️ the city looks so pretty with the falling snow. @plushnickwx said it unfortunately won’t stick around today. #snow #snowday #nashvilletn
Happy National Weatherperson’s Day to my amazing stud muffin of a husband, @plushnickwx. Please feel free to bring back the ☀️ very soon! 😉 #nationalweatherpersonsday #weatherman #tv #news #sunnyday #suits